The previous version of Scripting News toyed with the idea of having title-less feeds, but resulted in a view like below in NextGen Reader. 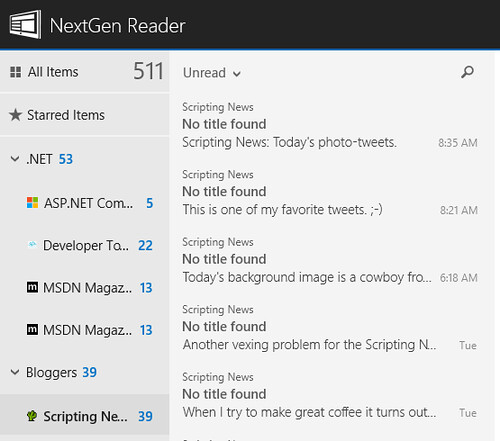 Recently however, Dave updated his software (i.e. his weblog) and along with it titles came back into play. You can see this in the first post in the screenshot below, makes quite a difference doesn’t it? Fact is that most feed readers area geared to work with a title accompanying the post albeit such a requirement isn’t mandated by the spec.

Whilst RSS without titles are a great idea if you post multiple updates per day, but with the lack of tooling to support it, it leaves the user experience for the readers in a less enviable position. Then again, is it much different to how Twitter works? What if we were allowed to import our OPML lists into Twitter and have items come through as they were posted?